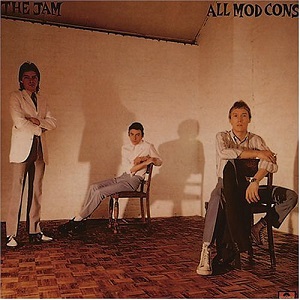 The language does not work well in this style. It may just be my ears but this song just isn't that good. This is my lowest ranking so far.

Collective Soul - No More No Less - 8

Even though I don't like a lot of post grunge bands, Collective Soul has always stuck out out to me. This song is a good example as to why I enjoy them, even if it does feel like guilty pleasure.

I'm not too into the music, and it's also a bit long-winded. It's fine as just another 90s alt. rock tune.
Festina Lente
Top

If you want translation.

If you want translation.

Thanks, I'll listen to it one of these days. And welcome back to the game, Romain!

Collective Soul – No More No Less: 4
One of the blandest songs we had yet. Nothing about this is memorable and the singer had a way of singing in an overdone way that annoys me.
Top

This song suffers from the same as some others, it sounds outdated for 2009. It reminds me of Modest Mouse, I quite like it. A lot of the alternative on this thread slaps hard.

I really liked the song first listen but it has grown on me even more.

I don't hear Supertramp, but more things like M83. I like it, although something I feel there are just a little too much elements in the mix, all vying for attention.
Top

212. Faada Freddy – Borom Bi: 8
Anyone who likes this should definitely check out the album which is 207 in my all-time list. I have 'Lost' from the same album in my top 1000 songs, maybe that will come up one day.

213. Orelsan – Suicide social: 7.5
A few years ago, I read an appalling misanthropic novel: "The Elegance of the Hedgehog". I'm interpreting the song as a satire of that sort of worldview. The clue is in the fact that some statements clearly contradict others. Highlighting the fact that misanthropy is both common and foolish. Essentially a hard nosed way of conveying the same message as Kacey Musgraves "Follow Your Arrow".

215. Passion Pit – Moth’s Wings: 5.5
Entirely pleasant, but too obviously composed to surf the musical trends of the time. I even hear a bit of Arcade Fire here.
Top

Green Day – In the End

This band is always likable, but Dookie of course has better songs.
Top

I know I have a strong bias towards Green Day but this is a great example of the straight forward punk side of Green Day. 90s Green Day will always get a good rating from me!

And now a long one:

I basically only know their 80s material, so this was a nice surprise; good mix of styles. The 10 minutes are stretching it a bit though, they tried to put a bit too much in there.
Festina Lente
Top

217. Madness – The Liberty of Norton Folgate

Madness – The Liberty of Norton Folgate: 6.5
I feel like that
Top

Liberty of Norton Fulgate is a 9 from me
Music is a world within itself, with a language we all understand - Sir Duke (1976)
Top

217. Madness – The Liberty of Norton Folgate

This is an easy 10 for me. It's probably my favourite song of the 21st century, and more than likely the song I've listened to the most times since it's release. There's so many bits to it, it's so re-listenable, it's even got a "have a banana" which is surely worth a bonus point (I'll give it 11!). I absolutely love the last 3 tracks of the parent album - NW5 / Clerkenwell Polka / The Liberty Of Norton Colgate.
Who put the bomp in the bomp ba bomp ba bomp?
Top

Madness – The Liberty of Norton Folgate: 8

Very captivating. I only know Madness from the hits they had in the eighties, but these were always fun. Good to hear they still have some greatness in them. There are moments were you can almost hear the glue that keeps all elements together come apart, but it hardly matters, as it is never less than lively. Definitely one of the more unexpected discoveries here.
Top

216. Green Day – In the End - 5
I guess it's part of the style but I just really disliked how the track was mixed. I liked the parts, just not how it was put together.
217. Madness – The Liberty of Norton Folgate - 8
Just fantastic, anything I could say has been said above already.
https://www.youtube.com/watch?v=wA15oCKCYHM
Top

Madness - The Liberty of Norton Folgate - 7

A nice tune, a bit dragged out. I like the waltz vibe to it but I feel like out of context of the album it is a bit strange. Its witty.

Another long one. One for the dance floor, but this time Krurze is not the DJ. It also ranks on AM at #1985.

Played this a few times back in my club DJ days.
Top

There is nothing wrong with it on itself, but this is not really my taste and it really wears thin for me with a duration of over 9 minutes.
Top

Could this song be dragged out any longer. And the thing that hurts is that that this is just an overal weak dace track for 80s standards, a decade that produced many great dance bands. Not only does the dragged out mid tempo song wear thin very quick, the snare/clap almost makes the song unlistenable and the vocals seem out of place.

Back to a more regular length, with the third entry of The Kinks in this game:

I was never very big on the Kinks artsy stuff. I always like the more blues influenced stuff the best. Here are my Kinks favorites:

Got some catching up to do:

Orelsan- Suicide Social 7 Not the most imaginative comparison to make in the world but he sounds like a French Eminem, taking the cartoonish provocation of his Slim Shady stuff to direct it at society like with Mosh. It's scattershot and relies on stereotypes familiar beyond its borders (rural folk are stupid and inbred, for example) but it's not meant to be taken seriously. When it hits, it slaps.

Collective Soul- No More, No Less 6 I hope the rhythm section has gone onto better things because they make the song so promisingly loose and limber until the piano, then vocals, emerge to nudge this closer towards 90s FM rock mediocrity. At times, it's got similar Freedom '90/Movin' On Up vibes to VW's Harmony Hall, only not as good.

Passion Pit- Moth's Wings 5 Here is the problem when every band attempts an atmospheric ballad intended for the closing montage of a teen drama. I like Passion Pit better when they're overexcitable, maybe even irritating, but fun at least, unlike here.

Green Day- In the End 7 Unsubstantial but entertaining snotty punk-pop they'd already mastered. The fact they manage to change tempo within a sub-2 minute track shows they were honing their mini-opera game years before Jesus of Suburbia.

Madness- The Liberty of Norton Folgate 8 Although lyrically, no great shakes, it's a bravura performance, pinwheeling through music hall, ska, circus music, Moroccan beats effortlessly. Their cheeky chappy image seems to deny them the respect they deserve for being a tight unit of talented musicians but if this is typical of their output since their reunion, they got back together for the right reasons.

Taana Gardner- Heartbeat 6 I want to like this, the choppy guitar and deep bassline are pure funk, the spoken word part is endearing too. The leaden pace and high-pitched synth effect badly let it down, though.

The Kinks- Misfits 6 For its subject matter, it's unmistakably conventional and you'd think Ray Davies, one of Britain's finest observational songwriters, could come up with a hook better than "Every dog has his day". All the same, there's a wounded melody to it that gives it humanity in spite of its stadium rock pretensions.

Good taste Hymie, AWRM comes in at number 4 Kinks song for me below Days, Autumn Almanac and Better Things.
Waat a liiv an bambaie when the two sevens clash
Top

I have no idea why, but I just don't like it that much.
Festina Lente
Top

The Kinks - Misfits: 8
Has a very classic Kinks sound that I just find hard to resist.
Top
Post Reply
275 posts