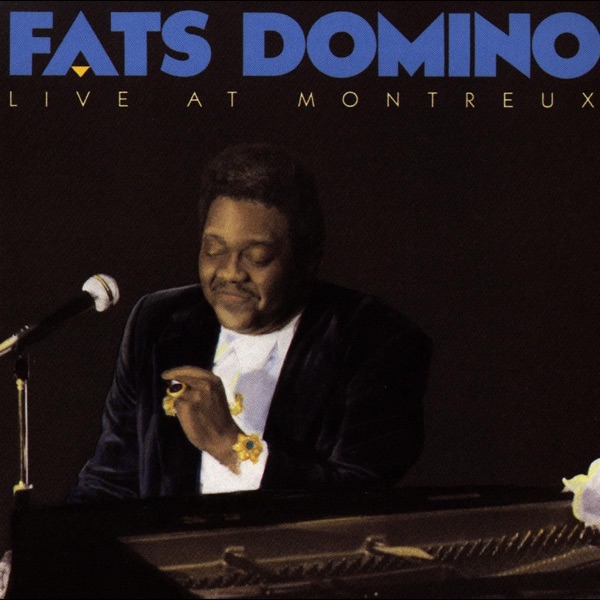 Merry Christmas everyone! To celebrate I give you a happy album that might not be Christmas themed, but at least it gives you a good mood guaranteed.

Most people who did this Album of the Week thing seem to have some history with the album. I only know Live at Montreux since very recently, when Fats Domino died on the 24th of October. That was when this series was started and I had it on my mind. I immediately wanted to share it. Not much of a backstory there.

Still, this is a truly great album. Fats Domino is a musician of the fifties, so he is mostly known as a singles artist. Like many contemporaries he lacks a true legendary album. Rock and Rollin’ with Fats Domino ranks at #2063 on AM and while it is fine, it is truly something as a stand-in because there is no “great” Fats album. When he died I was looking for something special to commemorate him. Why not try a live album? I had never heard any live recordings from him, but somehow guessed that he might put on a good show.

I was right. The Live at Montreux album was chosen somewhat at random. It was a recording from a 1973 concert, which means that it is from the time he had already abandoned writing new songs. By the end of the sixties he felt that his music had lost its appeal to audiences and decided to focus on shows only. You might expect that Fats was winging it by this time, with nothing left to prove. You would be wrong.

Live at Montreux is an album from an artist full of life and energy. These are all songs he recorded before in the studio and most of his famous tracks are here. I miss breakout single The Fat Man here, especially because that is a great rocker unto itself. Still it is hard to find serious fault with this selection. Fats Domino has described himself as lazy many times and his relaxed demeanour has made him one of the least tough and fast artists of the early rock era. Sure, he had real rockers, like I’m Walking and the earlier mentioned The Fat Man, but most of his work was very gentle compared to contemporaries. The great Blueberry Hill functions more as a ballad than as a rock & roll tune.

You wouldn’t notice it here. In Montreux, Domino rocked hard. Really, really hard. This is still the classic rock & roll sound. He doesn’t update his music for the trends of the seventies. This is piano boogie from the fifties. But damn, he gives Little Richard and Jerry Lee Lewis a run for their money. It’s like he wants to prove he is not so lazy after all. No balladry here, this is a party, with Domino whipping up the audiences like there is no tomorrow. His backing band is game too. Though Domino’s piano is the main attraction here I want you all to give a warm applause to the horn section.

As said, the songs are familiar, just reinvented to fit a higher pace. I love the most raucous songs in particular. On Jambalaya, Domino’s horn section seems to get stuck on repeat after a while and it is glorious and funky. Mardi Grass in New Orleans seems to be an instrumental for a moment, until Domino lets loose. Let the Four Winds Blow is a monster. When the Saints Go Marching In replaces every pretence that it is a religious song and becomes a honest to goodness epic. The finale – A Sentimental Journey – is as gentle as it gets and offers a nice coda to the concert.

If ever the search for a great album from Fats should be continued I point this way. Right now it doesn’t even rank as a minor classic. I don’t know other live albums by Fats Domino, so perhaps others from his are great too. Perhaps it was overlooked at the time, because it was released well after Fats Domino’s prime. Who knows, the renaissance might start here.

Rob, thank you for trying to keep this series alive. Given the lack of response (holidays be damned) I suspect it is a lost cause.

I did listen to your selection, although I've never liked early rock and roll, and the Fats Domino hits I did know never appealed to me, as compared to his contemporaries. So I'll have to disagree with you; this album struck me as the epitome of laziness. Only four tracks make it past the three minute mark; there's precious little room for improvisation, for highlighting the band or even for letting Fats' keyboard skills show. In fact he plays one riff all the way through; same barrelhouse styling, similar tempos, same chord progressions. This is my problem with this style of music; artists of the day found what worked for them as a sub-three minute radio single and polished that formula over and over.

Having said that, I'll give you that he does try, or the band tries, to crank up the party on "Jambalaya", on "Stagger Lee" and perhaps most notably by picking up the tempo of "I'm Walkin'". For my money, though, he fails. I think if I'd been there, I'd have been tempted to go all Deep Purple on Montreux and burned the whole place down.

I hope I'm not the only reviewer this week...
Top

I'll try to give this a listen - I'm pretty sure I missed my week to discuss Pageant Material, but I'll try and get to it at some point (life, you guys. It's busy).
Music is a world within itself, with a language we all understand - Sir Duke (1976)
Top

Fats is my favorite artist of all time and I have had this fantastic album for over 40 years now. Fats and his band are among the greatest live acts in rock and roll history. They were one of the main reasons that rock and roll audiences became integrated in the early 50s, as Fats was widely popular with both whites and blacks at that time.
Top

DocBrown wrote: I did listen to your selection, although I've never liked early rock and roll, and the Fats Domino hits I did know never appealed to me, as compared to his contemporaries. So I'll have to disagree with you; this album struck me as the epitome of laziness. Only four tracks make it past the three minute mark; there's precious little room for improvisation, for highlighting the band or even for letting Fats' keyboard skills show. In fact he plays one riff all the way through; same barrelhouse styling, similar tempos, same chord progressions. This is my problem with this style of music; artists of the day found what worked for them as a sub-three minute radio single and polished that formula over and over.


You are judging an era of music by latter day standards. Audiences for that style do not want improvisation AT ALL. We want to hear the songs played as close to the way they sounded on the records as possible, and Fats was great at duplicating his records live.

Criticizing 50s rock and roll for not being improvisational would be like criticizing "The Honeymooners" for not including jokes about Ralph and Alice having sex.
Top

Fats Domino is among the 20 greatest live rock acts of all time on this list:

I'd almost completely forgotten about this series. (So much so that, when I first saw this thread, I thought Rob was now reviewing albums as well as his 10,000 songs project.) As someone who loves music from the fifties and earlier (including the legendary Fats), but isn't typically a big fan of live albums, I was curious to see how I felt about this one. The main reason I usually don't like live albums is that I can't stop thinking the entire time how much I prefer the original songs. While I do still prefer the original versions of most of these songs, there are actually a few I like at least as much, especially "I'm in Love Again" (exemplifying his one-of-a-kind piano style) and "Jambalaya." Fats also does a fine job with the classics, keeping the spirit of the originals while simultaneously feeling fresh and energetic. In this case, my love for a fifties icon was more than enough to eclipse my live album bias. For me, this was a really enjoyable find.

Well I am giving this a go and I do think this feature should be permanent. If one cannot always listen to the album of the week, it doesn't matter. But it feels like the best music book club there could be.
Fats Domino had always been lurking around in my music collection. Upbeat, soulful and entertaining. I remember my father listening to Domino for a while in my youth and must have left its mark on me.
This live Best Of doesn't betray the artist. I don't know enough of Fats back catalogue to recognise studio from live recordings. But this was a good listening experience, short, exciting songs and perfectly rendered live. The sound quality is also top notch.